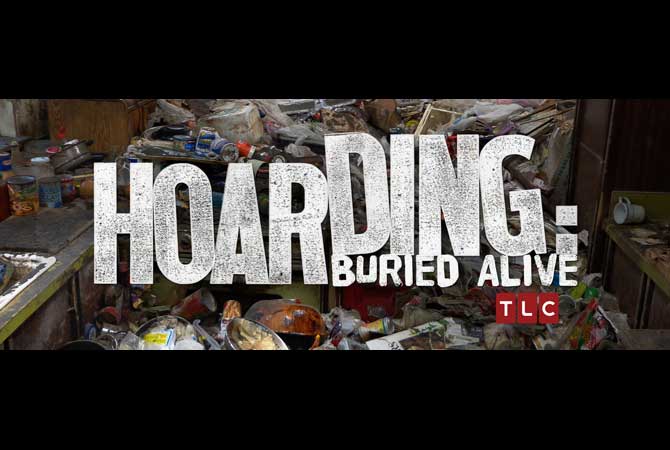 When I have time to sit down and relax (which is next to never) one of the shows that just sucks me in is A&E’s Hoarders and TLC’s Hoarding: Buried Alive. I am grossed out and appalled at what I see on those shows, but just like a car wreck, on the side of the road, we just have to watch, to see what happens.

There is nothing that is quite as crazy, or disgusting, or despicable as what is shown on these weekly Hoarding shows. I constantly have to make Kevin stop the playback so I can make comments about what I think about them.

To put it simply, these Hoarders are all fucking crazy, but for some reason, their families, their friends, and the many psychiatrists and Life Coaches that work with them, feel the need to coddle these people, and they feel the need to ask these Hoarders for “permission” to throw away an empty pizza box, that is sitting on top of three years of empty pizza boxes, in their living room no less.

In the past two years that we’ve watched this show, we’ve seen rooms piled ceiling high, with soiled adult diapers, that the occupants couldn’t see fit to throw out.

We’ve seen roaches and rats, of every shape and size, scurrying through the garbage and filth in these houses. Houses where children are actually living in also. One child had to bat away roaches time and time again, while she was trying to cook her fat ass, filthy Mother dinner in their completely nasty Kitchen.

I can’t even eat dinner while watching these shows because the living situations literally make you gag and who can eat while watching hundreds of roaches climbing on every surface in a house?

Five tons of trash being pulled out of these houses, sometimes doesn’t even complete the job. Yet the featured Hoarders are shown, time and time again, arguing with their family or the Psychiatrists, “why” they have to keep an empty plastic bowl, or a cheap plastic handbag, or a plate that is covered in rat feces.

These hoarding shows are the nastiest, grossest shows I have ever seen, yet I keep watching, thinking that it couldn’t possibly get worse than what we are seeing this week. Yet, every week, the stories DO get worse.

The other night, I just had to stop the playback because I couldn’t stop laughing. The show we watched went back to three Hoarders houses, to see where they were, 2-3 years after they had originally participated in the show. Needless to say, all three had fallen back to their old ways and needed help again.

The funniest thing was Shelly’s story. Her husband Gene point blank has told her that he is leaving if she doesn’t clean up her mess. They have no bedroom or living room because it is filled, floor to ceiling, with Shelly’s hoard. One of Shelly’s hoards is purses. She has hundreds and hundreds of cheap, ridiculous purses, that she can’t bear to get rid of. During one scene, she is sitting with the organizer trying to go through her purses. The Organizer is trying to explain logically, that she needs to make room for her family and that means getting rid of her purses. Shelly responds that the purses aren’t all for her, and that she is holding/storing some for her “twin sister”. The Organizer asks why her Sister doesn’t have room for the purses at her house? Shelly responds that she just doesn’t have the room, so Shelly is keeping them safe for her.

Shelly’s husband then pokes his head into the room, and asks if he may “interject” something? The women agree and he then proceeds to say that was a good “line” that Shelly said but she didn’t even have a Sister, (much less a twin!)

Meanwhile, Shelly is shooting Gene the “evil eye”, as if non-verbally she is trying to warn him. Shelly then states: “Gene, I would know if I had a Sister.”

Shelly then says to the Organizer that the reason they don’t talk about the Sister is because Gene slept with her!

Oh My God! I fell on the floor laughing!

In the other room, Gene tells the camera that he has been married to Shelly for 28 years, so he should know if she has a sister or not, and he has never cheated on his wife with anyone, let alone an imaginary Sister!

Even funnier, later in the show, Shelly’s son comes home from College and is appalled that not much has changed, or been cleaned up, since he was last home. He calls his Mother out on that, and she retreats and locks herself in the bathroom, because she is so hurt by his words.

Gene then goes into the bathroom, to talk to Shelly and because they are miked, you hear him asking why she is so upset, and she replies that the son has made her upset, and then Gene says: “Do you want me to call your Sister for you?!”

Oh Dear Lord! It just doesn’t get more comical than that! You have to watch the full episode of these crazies.

Another disturbing episode on Hoarding: Buried Alive was the one about Herb, Janet and Wendy, called “It’s Just Sex.” The hoard was bad but what was the most disturbing about this show, was that the husband had had an affair with a woman (Wendy) from work, and he had asked the wife (Janet) to join them, so they could have a threesome. You have to actually see this trio to see how strange and disturbing the actual thought of them all sleeping together is and I can’t even begin to explain the disgusting bed that the husband and wife actually slept in, or how the “other woman” came to their house, to help clean it out, until she found out that the entire crew knew about her affair with the husband, and she also found out, that she had been “outed” on national TV!

If you have a strong stomach, check out Hoarders on A&E or Hoarding: Buried Alive on TLC.

I have to stop writing now, because I feel the overwhelming need to clean out my garage…

Hoarding Buried Alive: Where Are They Now?: An Invisible Sister and Affair

Shelley finds herself blaming her hoard on her twin sister. But does she really have a sister? Her husband Gene is skeptical.

Hoarding Buried Alive: This is Romantic

Janet and Herv have kept their hoarding a secret from everyone. But as they confront the clutter, even more shocking secrets concerning their relationship and sex lives are coming to light. Now, they are in a fight to save their house – and their…