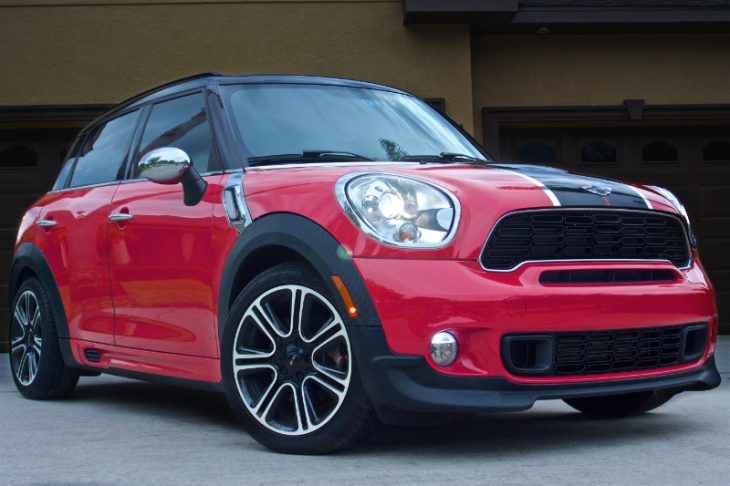 We tend to keep cars for a long time, and Kevin had his VW Turbo Diesel Jetta, for even longer than I had my NISSAN Murano (Jetta 20 years, Murano 17 years.) Unlike my car, his Jetta started having more problems, and it was costing too much to keep, for its age.

Kevin met a guy who owned two MINIs and Kevin came home one day and said: “I want to buy a MINI Cooper.” I had never heard of, or seen a MINI, so in true “wife” fashion, I said: “You don’t want a MINI,” thinking that I somehow knew better than he did, of what he wanted to drive!

Having said that, we went and test drove a used MINI Cooper Countryman and both really liked it. Not wanting to buy the first car we saw, we then started the search for Kevin’s MINI.

MINI offers so many different features and configurations, so you have to narrow down what you want in your MINI. Kevin didn’t want to buy new, so he was looking for a turbo-charged MINI Cooper S Countryman, in the 2015 – 2017 year range (because those were the years before the current body style change), that had the Harman Kardon (HK) sound system. He didn’t want a car that was from a snowy state, because of possible salt damage. At first he thought he wanted a British Racing Green (BRG) MINI but those are pretty hard to find, so we spent weeks looking online at Carvana, CarMax, CarGurus, etc., for a MINI that matched his preferences. We saw a gorgeous Starlight Blue MINI Copper Countryman, as well as a Midnight Blue, but he passed on both, because they didn’t have Black (Anthracite) headliners. There was a great Chili Pepper Red Countryman, in California, but it would have cost too much to ship it to Florida.

One weekend, our local Carmax happened to have a used MINI in stock, that wasn’t what Kevin was looking for exactly, but he was getting disappointed having not found a car yet, so we thought we would go test drive it anyway. The night before we went, I happened to look on CarGurus, and saw this 2014 Red MINI (listed as Blazing Red, which isn’t even a MINI color!) It wasn’t the year Kevin wanted, but it had less than 14,000 miles, and was around $14,600. The MINI was at the Mercedes dealership in Tampa, and according to the specs, it looked to be a base model MINI Countryman. Kevin didn’t want to waste the time, going to see it, since it was the wrong year, and a base model, but I said that since we were already going to CarMax, we might as well stop by this dealership.

The minute I set my eyes on this MINI Cooper S Countryman, I knew it was Kevin’s car! It looked way more sporty than any other MINI we had seen to date. It had cool wheels, and these fat spoilers on the front and back. While Kevin was talking to the salesgirl, I opened the glove box and found the original window sticker. This MINI wasn’t a base model at all! It had JCW (John Cooper Works) Interior and Exterior Packages. The JCW Interior Package upgraded MINIs normal leatherette seats, to Black Leather with Red piping. It also included the Anthracite Headliner and a JCW Leather Steering Wheel. The JCW Exterior Package added Sport suspension, a JCW Aero kit, Xenon headlights, and 18″ Twin Spoke, Light Alloy Wheels. The only things this MINI Countryman was missing was the HK Sound System, and its badges. We found out later that this MINI had been built in “stealth” mode, which deleted all the badges (i.e., Cooper S Badge, COUNTRYMAN Badge, etc.) Any JCW MINI adds thousands to the price, so the fact that this MINI had the JCW Interior/Exterior Packages, such low mileage, and was less than $15K was a steal! Plus it only had one owner in Florida, which was an added bonus. The only visual flaw was that the Black side scuttles looked a little bleached out, from sitting in the sun.

We took the MINI for a test drive and it was super fast and sporty. Despite it being an automatic, it has shifter paddles which allow you to easily down shift when cornering and passing. Kevin was still sort of hemming and hawing about buying it, because it didn’t have the HK sound system. The salesgirl said another couple was driving over from Orlando, and they had first dibs on the car. If they didn’t want it, she would let us know, and we would be next in line.

We drove over to CarMax, because the MINI Countryman there did have the HK sound system. It wasn’t nearly as cool as the MINI we had just driven, so I asked Kevin if that missing HK sound system was enough to lose a cool car over?

We got the call around 8:00 pm that night, that the first couple had passed on the car, because it didn’t have the badges! We drove over to the Mercedes Dealership the next day, and the MINI became Kevin’s!

This car started our love affair with MINI. How could we not have known about this brand? Kevin started finding all sorts of cool accessories for his MINI, like door lock covers and Wings, MINI car mats, MINI valve caps, and the COUNTRYMAN logo for the trunk area. He replaced the interior and exterior lights with LED’s, and added MINI Logo puddle lights. This MINI came with Black Jack Mirror Caps, and Black Side Scuttles with Black Jack inserts. Lots of MINI owners choose to dechrome their MINIs but Kevin went the opposite way, and added Chrome Side Scuttles and Chrome Mirror Caps. He later added the Black and Chrome stripes to the hood, as well as the Cooper S badge, and named him Red Ball Jet, because, of course, every MINI needs a name.

I started getting kind of jealous because I was still driving my old Murano! There were so many cool things that this MINI had, and that you could add to the car, that I figured I might as well start looking for a new car myself. I didn’t think I would want a MINI though, because whenever I rode with Kevin in his MINI, I got a headache from the seat, plus I thought it was way too small for my shopping needs. Sadly I figured the MINI wasn’t for me, and started my search for a new car…