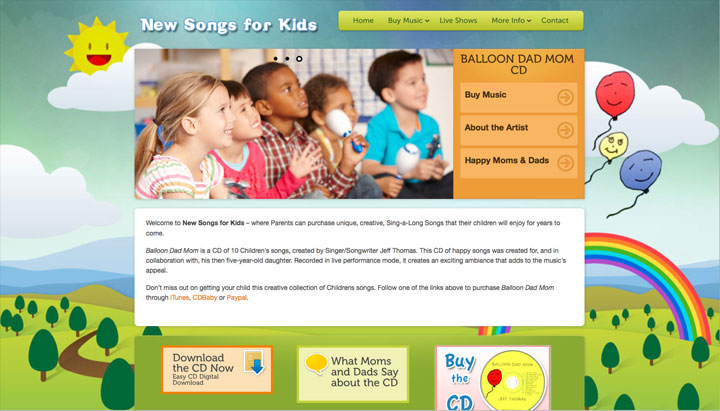 When Jeff and I were discussing ideas for websites, he told me that he had recorded a CD for Children, a few years back, and had great success selling it on his own. Jeff originally wanted all his music on one website, but when I heard about this CD, I knew it had to have a look and a website all its own.

Jeff is a single Dad, who has great love for his daughter Kazue. While Kazue was growing up, Jeff wrote songs, just for her, which he then performed live, at local schools and recreation parks. What Jeff found out was there was a real need for original Children’s music that got the children interested and involved in the songs. With the help of Kazue, Jeff recorded Balloon Dad Mom and from the very first song, called The Shot Song, where the chorus goes: “No, I do not, like getting a shot,” you can easily see how children quickly relate to the song’s theme.

I don’t have children and my friends know that I tolerate things for children with very little enthusiasm. I didn’t think I could really get into this project when I started it, because I didn’t have that natural affinity towards kids. Boy, was I wrong! When I listened to Jeff’s Balloon Dad Mom CD for the first time, I found myself laughing out loud at parts of it. Best (and worst) part about the CD? I found myself not only singing along with the songs, I found myself singing the songs as I went about my day!

If this CD can make me sing along with it, imagine the effect it will have on kids and their parents!

We are excited to have created this second website for Jeff that showcases his Balloon Dad Mom CD of Children’s Songs. Jeff has already sold hundreds of copies of this CD on his own and this website will surely quadruple those sales quickly.

If you have a child, you need to buy this CD! Jeff’s clients have actually worn out copies of this CD, from it being played over and over again, and have returned to purchase new copies for their family.