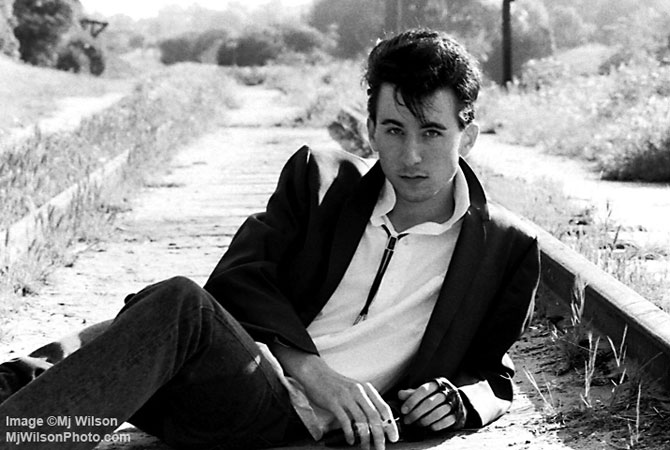 I have known Todd ever since I moved from Boston to LA, many, many moons ago. We met at Cal State Fullerton, where we shared a dreary Art Class together and we proceeded to terrorize that campus for the next few years! Todd and I have done more things together than I have probably done with all my boyfriends and husbands combined.

I had just moved from the intense music-infused scene of Boston and New York, and thought LA was going to be even crazier than that. Our college, was based in Fullerton, which is about as mainstream and “Apple Pie” as you can get. It’s located right next door to Anaheim, which is home to Disneyland, if that gives you any indication of what life is like there.

I hit Cal State in pencil thin black pants and short hair with Pink Crazy Color strands in it. I loved rock bands but had somewhat of a “punk” look, from my recent days in Boston/New York. Todd was two years younger than me and was very into the New Wave scene that was starting up in LA.

My Photo classes required me to shoot projects, so all my newly found friends were “drafted” into Photo Shoots. Todd was always “game” for photos and wore many different “hats”, over the years, as my projects required them. Eventually, I even cast him in movies we had to make for our Radio/TV/Film classes. (This is why I need to blog about him now, because he is a part of so many posts to come!)

Both Todd and I loved music but Todd HATED any sort of rock band – most especially Aerosmith and Van Halen, since they were near and dear to my heart! In return, I hated some of the more “avant-garde” bands that he liked. We found mutual bands that we both enjoyed and spent weekends just going out and dancing to them. I have never danced so much in my life, as I did with Todd! He had this “theory” that we had to dance in 15-minute “stretches” or it didn’t do us any good. I was still a smoker back then, and those 15-minute stretches just about killed me sometimes! We did have fun getting our “looks” together to wear out to these dance parties we attended though! Todd even made me jewelry to wear and one cool bracelet was made of leather and pen quills. I think I ended up losing that in a bar fight though!

Todd and I also started creating our own Christmas Cards every year, which I will blog about in separate posts. 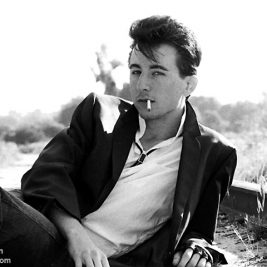 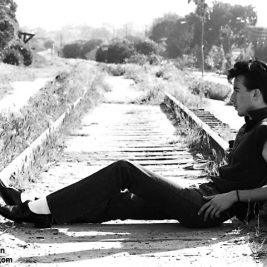 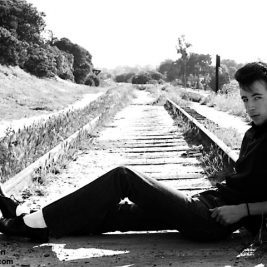 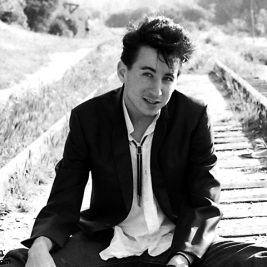 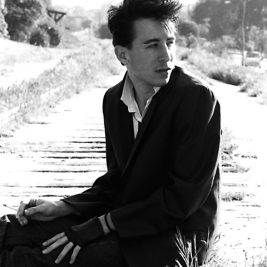 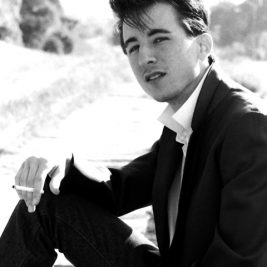 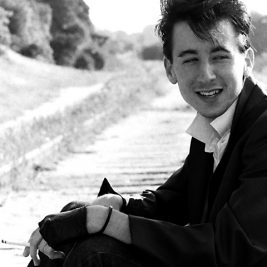 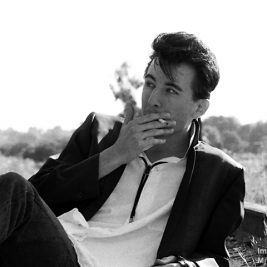 Because we both had a different “look” than most people at our College, and most of those people were not into Music or Art, etc., and didn’t understand why we were doing creative photo shoots all the time, we both got “labeled” and people would call us “Punks” or tell us we looked like “Barbie & Ken” in our photos (only a much darker version of Barbie & Ken!) We didn’t care though, and that “labeling” is what started the funniest and longest running jokes that we shared and played on each other!

For example, people would tell me that I looked like Pat Benatar, with my short hair. I hated Pat Benatar (sorry Pat) and Todd used every opportunity to remind me how much I looked like her. I still have letters and cards that he would create and mail me, to torment me, and to this day they bring tears to my eyes because I am laughing so hard reading them over again!

As you can see by my photos here of Todd, he does look like a very young, Elvis Presley at times. Our discussions about that turned into him pretty much signing off as “Elvis” in all his letters to me. Then, because we were together so much, eventually he would refer to me as Priscilla, his wife. I’m trying to set up and explain the running jokes we had with each other, but maybe when I post images of the actual cards or correspondence we sent each other, you will see how we used to unmercifully tease each other, time and time again.

Nothing was safe from us….rock stars became my boyfriends or husbands…for Todd, one day he was living with Debbie Harry of Blondie and the next he was off touring Europe with Bryan Ferry! Through this all, our other friends just shook their heads, because they didn’t really “get it” but we had so much fun thinking of all this crazy shit together!

If either of us sent the other a gift, sooner or later it was “turned around” on the giver and sent back as a “mocked up” version with amusing alterations to fit our current “storylines.”

Many people, over the years, have wondered about and/or asked us about our “relationship” status. They couldn’t really understand how we were so close, and shared so many things and experiences together, but yet we weren’t married, or living together, etc. They knew that if Mj was around, Todd wasn’t far behind or vice versa. (They weren’t aware that people like us “hunted” in pairs!)

For the record, Todd and I have never dated or been a “couple”. Todd and I have never lived together and we have never had sex. We’ve traveled to Boston and New York and Seattle together and we’ve even slept in the same bed a few times (once he got over his “fear” that I would somehow attack him and steal away his soul, or something to that effect) and Todd swears that he saw my boob once in Boston, during a photo shoot, but to this day I tell him that is not true (as much as he wishes that it was!)

I guess I can sum up our relationship with an email we shared a few years ago. We were talking about friendships and I asked him if he thought one could actually just “court” someone to become their friend? Todd’s answer to me was: “I know what you mean about courting someone to become their friend. I actually love that funky grey area between friendship and lust, gay and straight, platonic and romantic desire, etc. I’ve courted a few friends in my day. Well, many, actually. Maybe even you, after I got over the Van Halen button you were wearing.”

Oh Dear. Todd got “over” the fact that I wore a Van Halen button at times…little did he know that I also had the Backstage Pass and matchbook from the same tour!!!!!!! He will never forgive me for that, now that he knows! 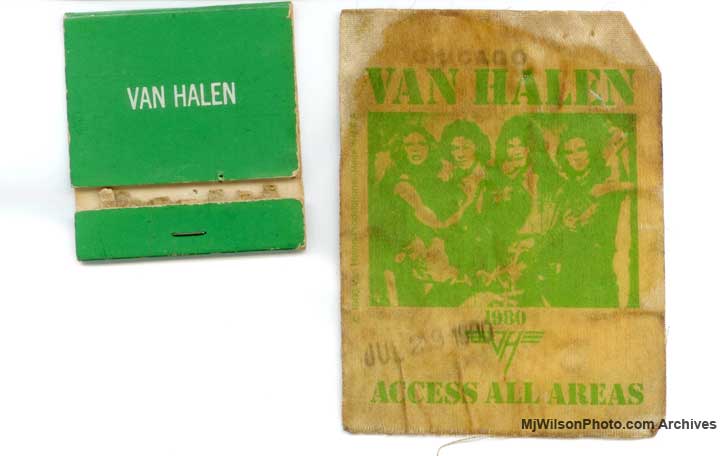 Todd and I still have one Holiday Photo Shoot left to do together. We never got to do the “Happy Harley Days” Christmas Card because, well, neither of us ever owned a Harley and we were too afraid to ask to borrow one! 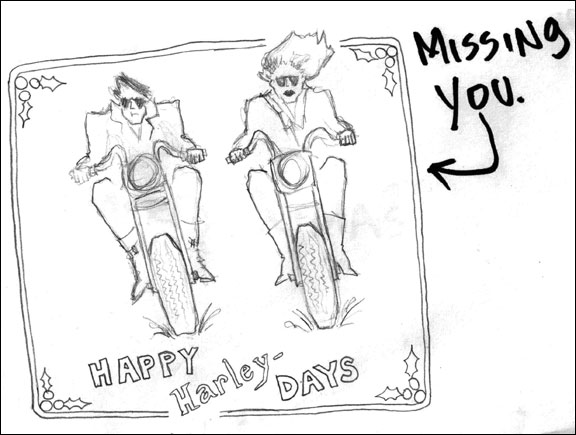 Todd will also be very amused to see that I have posted him under a category called “Random Hotness” but all the while he will be secretly pleased!

NOTE: Todd does not smoke, has never smoked, yet he is pictured with a lot of cigarettes in his hand! I think he thought it made him look “Bad-Ass” or I could have made him do it, for the photo!

Click Here to watch Todd’s acting abilities, in my Music Video to Perfect Wave by the Peter Dayton Band.