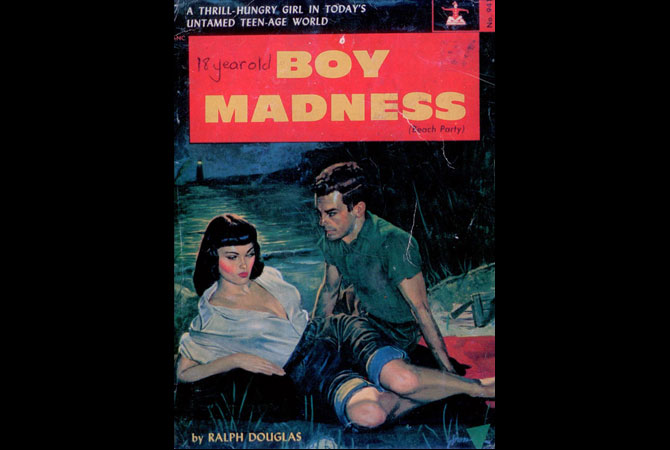 My friend/roommate, Krystyna, sent me this card when she found out that I was lusting after an 18-year-old boy, when I was 22.

Krystyna and I had met Gary and his friend (Mark?) at The Troubadour and we had spent quite a few weekends talking with them in the front bar. Gary and Mark were in a band together (of course) and I remember that Gary was really tall and had really long reddish-brown hair, which was a departure from my usual dark hair fixation. Gary and I did a fair amount of flirting, but I kept teasing him and giving him a hard time, because he was so young.

Sadly, that night never went any further than a 3:00 am swim at his apartment pool (fully clothed of course!)

The above story came to mind, because I’ve been watching the Bravo Show Fashion Hunters and I even met Karina Lepiner (one of the cast members) when I was in New York, because she was the one who sold me a Chanel bag at her store.

In last week’s Fashion Hunters Show, Karina and pals go to a Runway Show where one of their newest consignors (a young boy), is walking. In another of the show’s scenes, we find out that Karina is married, and has two children, which is something we never expected. Especially so, after seeing her hug all the young boys, backstage at the Fashion Show, while breathlessly announcing: “I am so Boy Crazy!”

Hooray for Karina! I agree with her!