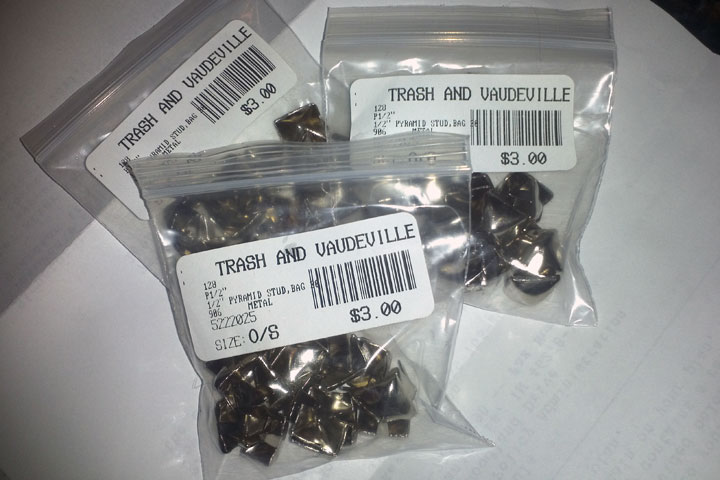 Our last day in New York and the warmest day so far. T-shirt weather in November…who would have thought?! We hadn’t made it down to the Village yet, so that’s where we headed.

Went to Trash and Vaudeville which looks like it hasn’t changed in 30+ years. Bought a studded bracelet and loose pyramid studs because I am tricking myself into thinking that I will creatively attach them to some jacket of mine. More than likely they will just end up in a drawer.

We had planned to go somewhere for lunch but then we happened to come across a bakery…I know what you are thinking…that I went in and bought cupcakes!

Well, I didn’t. I bought this luscious Chocolate Mousse Pillow sort of thing and a Chocolate Canoli. I just had to eat the Mousse thing right away, so I made Kevin sit with me, on someone’s doorstep, so I could devour it. The Canoli was nasty, so I ended up throwing that away. 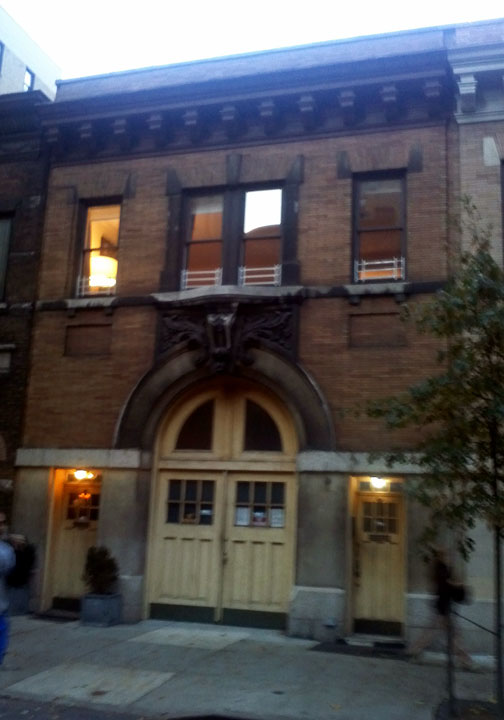 Love these houses in NYC. They all have individual charm.

Barney’s is always disappointing and Bloomies was only a little less crazy than it had been on Saturday. There wasn’t anything new to buy (except for that damn Prada wallet that was still haunting me) so I left and headed back to the hotel.

While we were waiting for our ride to the airport, I talked to my new “best” friend, who is David Bach, our Concierge at the Affinia Dumont. Next time I come to town (which he seems to think will be in December) we are going to hire a car and driver and go shopping together, all around town. Sounds like such fun!

Kevin seems to have made friends with the doormen because more than one of them told me that Kevin had said they could come stay with us in Florida. One guy even invited us to his Italian family’s home in Queens, the next time we’re here.

I have to say again, that staying at the Affinia Dumont was just incredible. It really feels like you are staying with friends rather than in a hotel. I had really liked the Empire Hotel, when I was here back in May, but the rooms at the Dumont blow the Empire away.

Had a long ride in traffic out to JFK but our plane didn’t leave until 9:30 pm. We have found the secret for travel to and from New York City…arrive midweek on a morning flight and leave late at night, on a weeknight, and no one is on the plane. There were probably only 50 people on the plane which meant that everyone had their own row to themselves.

I crashed in the back seat on the way back to Tampa. I had just run my sixth Designer Handbag sale on Beyond the Rack, over the weekend, so we came back to having to ship out about 90 Handbags. Nothing like jumping right back into work.

This trip had been Kevin’s first time to New York City. He never wanted to go in the past…had no interest in it whatsoever. He had a great time at the museums he went to and he even enjoyed part of the shopping. He was also really surprised at how nice everyone was. He saw the same thing that I did, on my previous trips up here this year…he saw people helping out other people on the subways, he had people talking to him that seemed interested in what he was doing and he even had a celebrity “sighting.” He was walking either to or from a museum, on the Upper West Side and he saw John Lithgow talking on his cell phone. He said he recognized the voice immediately.

So sad to have to leave New York again. Can’t wait for the next trip…whenever that may be.