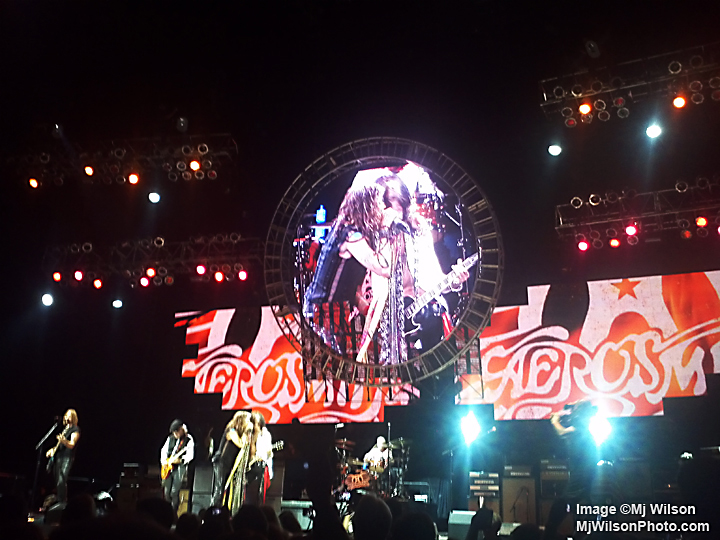 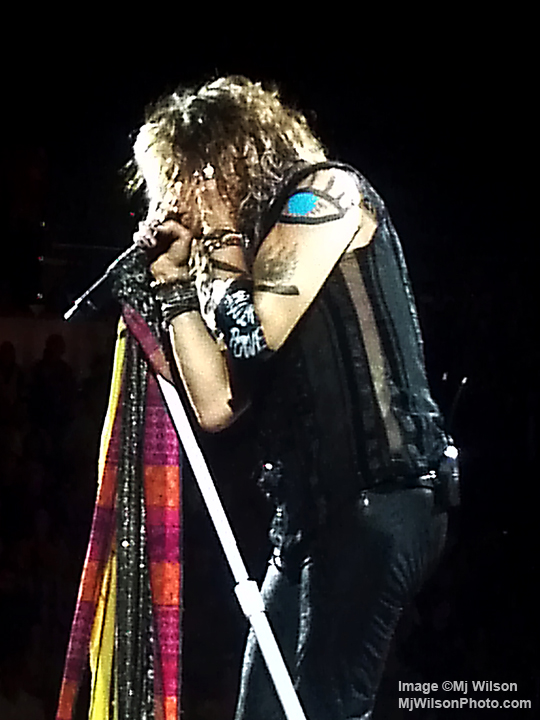 God knows I talk about Steven Tyler a lot on my blog and with good reason. I have one thing to say and I’m not ashamed to say it: Steven Tyler is still the hottest Rock Singer in the world! This man is 64 years old and his ass still looks good in tight, tight pants and he drives women of all ages to scream with abandon when he hits the stage.

I lucked out (and so did Kevin) when my friend, Danielle Simms, agreed to be my date for the Aerosmith concert in Atlanta. Even though she managed to be 25 minutes late for this monumental occasion, she arrived in style, in her ruffled mini nightgown, that drove fellow male concert-goers crazy! (Seriously, some guy handed her his business card and pantomimed picking up a phone and mouthing the words “Call Me” to her!) I think this same guy tried to “direct” me on what to shoot, whenever I put my phone down for a minute!

Cheap Trick was the opening act for Aerosmith and even though they are from my hometown of Chicago (kind of), in all these years of concert going, I never had the chance to see them play live. The band was tight, and sounded great. Robin Zander had some weird hair thing going on under his hat though (like sheets of hair extensions had just been attached below his center part) and bass player Tom Petersson looked like someone had just woken him up from a nap. Rick Nielsen made up for all that with his wild throwing of hundreds of guitar picks at a time, into the audience. 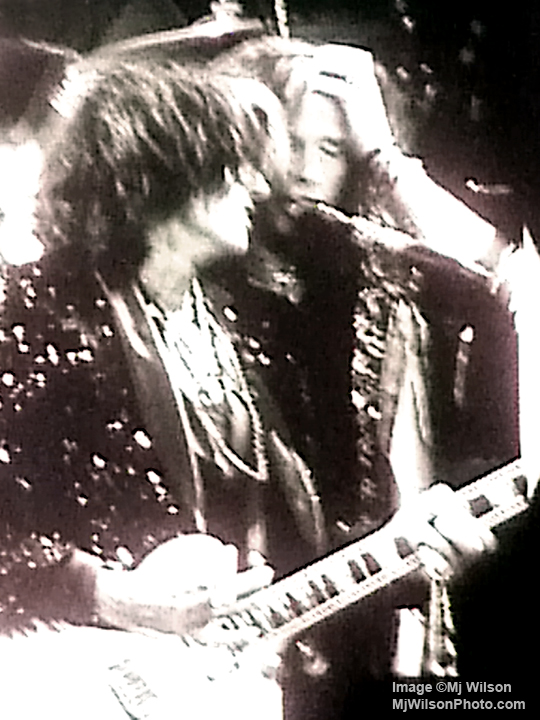 I wish Cheap Trick had played my favorite songs like She’s Tight or He’s a Whore, but they didn’t. They did play Stop This Game, Surrender (of course) and their beautiful ballad, The Flame, which is another one of my favorite songs.

I missed the first 15 minutes of Cheap Trick’s set, waiting for Danielle, and unfortunately their set ended quickly, but then the quickest stage turnaround I’ve ever seen happened, and before we knew it the lights dimmed and the Aerosmith show started!

I had obsessed about buying these concert tickets because I wanted the absolute best seats I could get without spending thousands on them. I have seen Aerosmith shows over and over again, starting in the nosebleed seats and then moving down to the floor. I have learned over the years, that while the seats off to the side have great views, you really miss the entire vibe of the concert, if you are not in the thick of it, in the floor seats. If you have floor seats, you are on your feet dancing and singing for the entire concert!

Three years ago, I sat in the 27th row for an Aerosmith concert and it wasn’t close enough. This time I bought 11th row seats for one reason…I had noticed from the concert venue layouts that most of the shows had a center catwalk coming out from the stage. I knew from previous Aerosmith concerts, that they would start the concert, on the end of that catwalk, and then spend a good amount of the concert time on it. I felt bad for the people who had spent thousands of dollars for 1st through 6th row seats, because my hunch was right…My 11th row seats turned into 3rd row seats when Steven Tyler and Joe Perry rose up through the floor, at the end of that catwalk, and started the show.

Oh be still my heart! 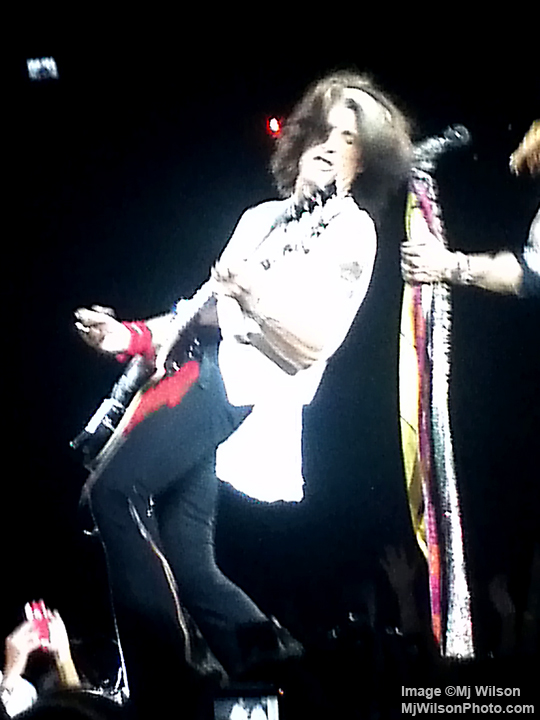 Aerosmith launched into Draw the Line and the energy never stopped. While the concert was happening I noticed something was different but I couldn’t put my finger on it. After a few days I figured it out…Steven Tyler has always had a frantic energy when he performs. From way back in the day, when he used to do front flips, to running from one side of the stage to the other, to spinning in circles with the mike stand and all of his scarves. This time the difference was that his “frantic” energy was gone and it had been replaced by a practiced, assured, sexual prowl. Those are the best words I can think of to describe how Steven Tyler commands a stage and the audience that he drives into a frenzy with his moves.

As an Aerosmith fan, I want to watch and absorb and enjoy every second of their concert.

As a photographer, (and as a lover of Steven Tyler) I can’t help but try to capture photos or videos of all this action. How can I not shoot when I am only a few feet away from my favorite obsession?! 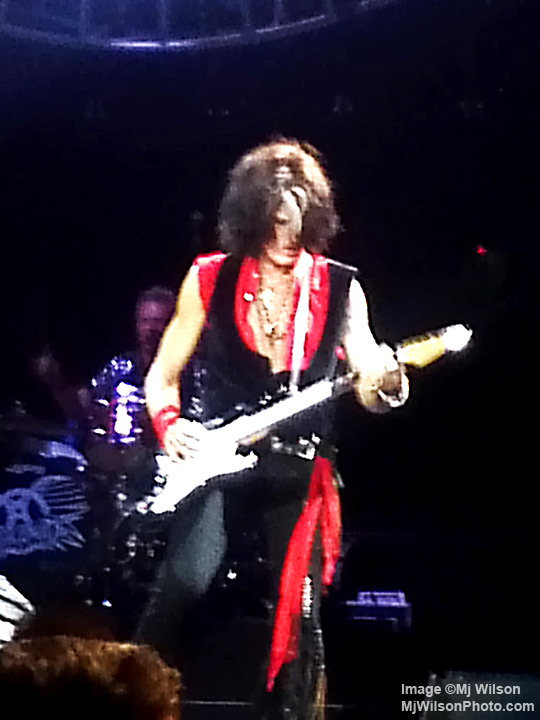 I do not have an iPhone. I have a POS LG Smart Phone that I should have gotten rid of after I found out it didn’t shoot so well at the INXS concert last year. I was deleting photos and videos on the fly (to free up space), but kept a few of them that looked “promising”. Well…let’s just say that what looked good on my cell phone screen, doesn’t look so good on any other screen.

So I apologize in advance for the photos and video I have posted here. I should have had better equipment (or a better phone) but I didn’t.

I am including some video footage from the concert at the end of this post with a disclaimer attached to it — THE AUDIO IS VERY LOUD AND TERRIBLE!

The video moments I captured were priceless, so I had to include them. I have Steven and Joe Perry rising up through the stage to start the concert. I have two separate shots of Danielle in between me and the stage, and best of all, I have Steven Tyler singing Livin’ on the Edge, right in front of us, less than 15 feet away! We were blinded by the spotlights on him but he moved a bit to the left and moaned and groaned into the microphone for a few seconds, much to the delight of all the screaming women around me. 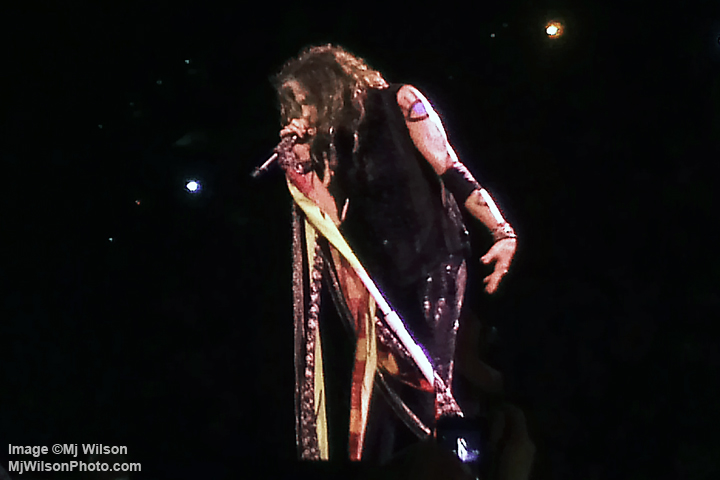 I must point out that the video feature on my phone does NOT zoom in. Video shoots in one setting only and everything usually looks really far away, even though I am much closer than it seems. (Almost like the video camera has a wide angle lens on it.) When you watch this video I have posted, and see how close Steven is to us, during Livin’ on the Edge, remember that he is even closer than it looks.

Next time (and there will be a next time) I will go to the Aerosmith Concert with a much better camera (or phone.)

If you haven’t bought tickets to Aerosmith’s Global Warming Tour, you have missed out on one of the best concerts of the year.

Watch my Video Highlights from the Aerosmith Concert in Atlanta, GA on July 26, 2012. WARNING: Audio is very loud and terrible.

Click Here – To read my story about how I met Steven Tyler (a long time ago!)